Four Most Common Objections, When To Use Them, and How

Objections are how a person uses their right to a just proceeding to keep the trial process fair. The four most common objections in court are hearsay, relevance, speculation, and argumentative. Knowing which objections to use and when are crucial to protecting both sides of the story.

Step by Step Basics of Objections

Example: ‘Excuse me, your honor, objection on the grounds of irrelevance.

2. The judge will then either ask for more reason for the objection or address the opposing party.

Example: Judge asks, ‘Which part of the statement was irrelevant?'

Objecting party: ‘The cat in question has nothing to do with the dog in question.'

4. The objection is noted by the objecting party in their records in case there's a need for an appeal.

Relevance refers to when a party thinks the evidence brought to the judge or jury is irrelevant. Irrelevant evidence should be left out of the trial because it doesn't bring anything new or important to the case and is distracting from the necessary information. Sometimes irrelevant evidence can make both sides look bad and wastes precious time. A person can object to questions or answers that are in part, or completely, irrelevant.

Example: “The victim's favorite color was yellow, wasn't it?” (example from College Vine) 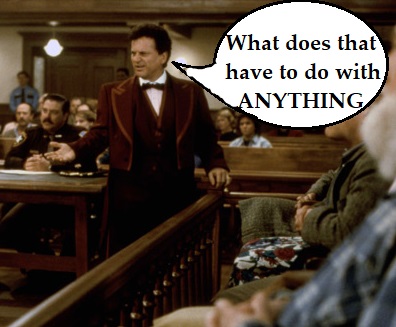 Speculation objection is objecting to witness' testimony because a witness was asked a question about which the witness wouldn't have personal knowledge. A witness' side of the story is limited to their direct involvement with events with hearing, sight, touch, speech, or smell. Everything that isn't a witness' involvement through one of the 5 senses is a guess or an opinion and not factual evidence. A common reason for speculation objections in court is when a party asks a witness to state someone else's feelings or thoughts as fact.

Example: The witness hears a gunshot from around a corner, runs, and sees the victim dead, and the defendant holding a gun. The following is speculation: “I believe the defendant shot the victim”. (example by College Vine)

TIP: Objecting too much can annoy the judge or jury, so it should only be done when needed.

An argumentative objection is when someone argues, badgers, or becomes too aggressive with a witness during cross examination. However, a judge will allow persistent questioning if they are cross examining the defendant. Argumentative objections are often made when the question for the witness tries to change their answer by inserting the attorney's personal understanding of the evidence into the question. It is the jury's job to choose whether to find testimony or evidence persuasive.

Example: “How can you sit here and lie to the court about your attitude towards the victim?” (example provided by College Vine)

TIP: It is important to not argue with a judge on a ruling or for their reason for the ruling

Hearsay is when a witness testifies about something said by someone else to prove evidence is true or false. These statements are hearsay because the actual declaration of the statement in question is neither under oath, on the stand, or going be cross examined. This makes hearsay statements unreliable except in a few situations. If a witness is testifying to someone else's statement to justify a resulting action, rather than being stated as truth, the testimony is not hearsay.

Cindy: “My friend, Max, told me defendant always has a temper with other men.”

Cindy isn't stating whether she has seen the defendant have a temper and her friend cannot be cross examined, nor is her friend under oath.

Top 10 Objections in Trail By Venture Law By Jarret Stone

Research on objections from a judge's perspective was provided by Jim McElhaney's article, ‘Play by the Rules: There is a Right Way to Make Objections'.

Some examples were provided by College Vine in their Ultimate Guide to Objections in a Mock Trial.