Transgender person’s rights when detained, transported, and placed in detention 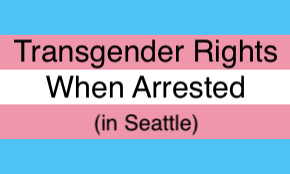 Transgender people have the right to safety in any encounter with the police, and that right continues if transportation and/or detention occurs. Not only does this right apply to feeling safe during officer searches, but also extends to a transgender person's safety in relation to others during transportation and at detention facilities. Transgender people have a right to safety and the right to insist that all of these protocols are followed. “Transgender status is never by itself a lawful basis for a stop, search, or arrest” (16.200(4)-POL).

The Seattle Police Department manual provides guidance for officers with any interaction with transgender individuals (16.200-POL).

Officers must consider a person to be transgender if that person self-identifies, or if the officer, upon reasonable belief, asks and receives an affirmative response. Officers have discretion in asking. Self-identifying instantly prompts the following actions that officers must take.

All department employees must use the transgender person's preferred pronouns and adopted name and must ask what pronouns are preferred if they are uncertain. The person will still be booked under their legal name, but the adopted name must be entered under “A.K.A. name” and used when addressing the individual.

Officers are not allowed to conduct any searches to determine an individual's sex, and the search may not be more invasive than procedures for non-transgender people (also found in 11.010.17-POL). Officers can only do a standard pat-down.

Except in emergency circumstances, two officers must be present during a search (except under emergency circumstances which the officer must be documented). Officers must inform transgender people of their right to express a preference of officer gender to perform the search, and one officer involved in the search must fit that preference “whenever possible.” The search may continue if officers deem the delay to be unreasonable, or an officer of the preferred gender is unavailable.

If no preference is given, at least one officer of the individuals gender expression will conduct the search. If in doubt on this protocol, officers must call their supervisor to the scene prior to a search.

During a search, officers cannot seize or remove appearance-related items unless the items are evidence or a safety hazard.

Transport and Detention at Seattle PD

Whenever possible, officers must transport and secure transgender individuals alone (also found in 11.020.11-POL) whenever possible. If necessary additional officers must be called to the scene to assist. This also applies to placement in a Seattle Police Department holding cell. If an individual cell isn't available, the supervisor must make arrangements for the transgender individual to have a solo cell, be transported elsewhere, or be released.

Officers must verbally relay all identity-related information when transferring custody, including how the transgender person would like to be addressed.

Detention at a Correctional Facility

As for detention in the King County Correctional Facility, although a transgender person may be asked whether they prefer to be among the male or female population, a spokesperson for the King County Department of Adult and Juvenile Detention suggested that the standard procedure is for a transgender inmate to be placed in restrictive housing temporarily. This often means solitary confinement. [See: https://www.kuow.org/stories/street-medic-arrested-during-seattle-protest-jailed-in-isolation-because-he-s-transgender]

Washington Department of Corrections mandated (as of February 2020) specific guidelines.

Preferred pronouns and names must be documented and used in documentation and verbal interaction. If arriving individuals who do not have a PREA (Prison Rape Elimination Act) Risk Assessment on file, they must be evaluated and placed in the least restrictive housing pending the final outcome of that assessment (which must be conducted within 72 hours of intake - not including weekends) AND/OR placed upon the decision of the MultiDisciplinary Team's review of the housing assignment within 10 days of arrival.

Transgender persons at high risk for sexual victimization must only be housed separately if there are no available alternative means to separate them from likely abusers. The deputy director can approve placement in the general population. The individual must be asked if they feel comfortable staying with the general population and can then sign a preference request document stating that.

While at the correctional facility transgender persons must be allowed to shower separately (by request) or separately if it seems necessary for their safety. They must also be allowed to keep their appearance in a way that is consistent with their identified gender.

Strip searches are not allowed to determine genital status and can only be determined by health care providers in conversation or during a broader medical examination in private.

Transgender, intersex, and gender non-conforming people must not be grouped together in a facility based solely on their status in one of these groups.

This article was created after doing pro bono work for a client arrested at the Seattle CHOP protest.